Carguide Best Buy
The Carguide Best Buy Awards are given annually to vehicles that offer the best value for money to Canadian Drivers. These awards are much coveted by automobile manufacturers for two key reasons: first, because they are given to cars and trucks that have proved their worth on the road; and secondly, because consumers themselves have a hand in choosing the winners - casting their votes alongside those of Carguide's editors. Given Toyota's reputation for quality, it's no surprise Toyota vehicles are well represented in the winners circle. 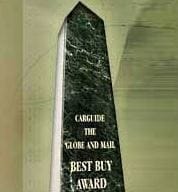 We are closed for the long weekend including May 21st,22nd and 23rd.