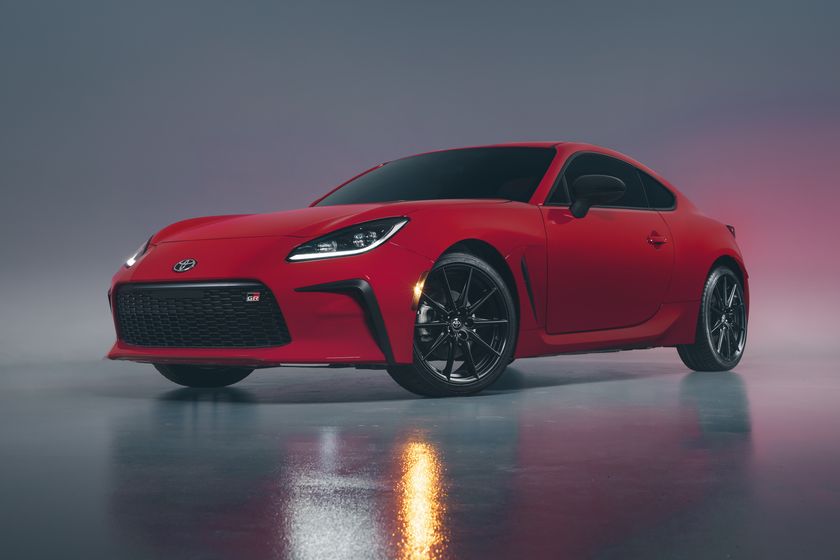 The car that marked the revival of Toyota’s sportscar lineage is now giving drivers even more of the agility, style, and responsiveness they desire. For this round, the detail-obsessed Toyota Gazoo Racing team brings enhanced handling and exterior aerodynamics, increased power, and an upgraded interior. These changes earn it a Gazoo Racing badge, joining Toyota’s ever-growing, global sportscar line as the all-new 2022 GR 86.

With its wide stance and low centre of gravity, the 2+2 rear-wheel drive coupe’s handling changes come in the form of front and rear frame reinforcements that increase rigidity. Functional exterior air vents were also added to further support steering stability. Weight shaving details like aluminum roof panels and fenders also kept it at a nimble curb weight of just over 1,270 kg.

The 2.4L naturally aspirated, horizontally opposed four-cylinder boxer engine, brings the power upgrade – increasing from 205 to 228hp and from 156 to 184 lb.-ft. of torque on the manual version. The power boost come from tweaks like increased bore size, changes to the intake and exhaust systems, and optimization of the Toyota D-4S dual injection technology. Drivers will have the choice of a 6-speed manual (MT) or automatic transmission (AT).

Available in two grades, GR 86 and GR 86 Premium, it will come in seven exterior colour choices, including the aptly named Track bRed. The premium grade comes equipped with a rear duckbill spoiler, adding dynamic contours to the car’s sporty feel.

The cabin gets upgraded front seats with a deep bucket design and side bolsters that keep driver and passenger supported during serious cornering. GR 86 Premium grade seats are upholstered in Alcantara with leather accents. Leather-trimmed driver touchpoints and silver-coloured accents also add a race-inspired touch to the cabin.

When the 86/Scion FR-S was introduced in 2012, Akio Toyoda’s aim was to re-capture the spirit of Toyota’s famed sports car from the 1980s and ‘90s. With a name in tribute to the mid-1980s AE86 known in Japan as the “hachi-roku” (meaning 8-6) and known in North America as the Toyota Corolla GT-S, the 86/FR-S was developed to give sportscar purists an affordable, agile, rear-drive sports coupe.

The new generation GR 86 takes cues from its “hachi-roku” forefather. Its low overall height and hip point give it an athletic look. The fender tops extend horizontally to the beltline and give it a stance distinctive of front-engine, rear-wheel-drive sportscars. Its low, horizontal underbody and narrowed rear cabin combine to create a launch-ready appearance. Colour choices include Track bRed, Trueno Blue, Neptune Blue, Halo White, Steel Grey, Pavement Grey, and Raven Black

The result? The all-new GR 86 now delivers linear acceleration across a wider band of rpms, delivering a longer surge to drivers.

The front of the vehicle features a GR-specific Functional MATRIX “G Mesh” Grille, which fuses performance and expressiveness. Its angular LED headlights compliment the aerodynamic front aim dams and vents, with side sill spoilers to aid steering responsiveness and stability. And those vents? Well, we’ve place ducts in the front bumper and wheelhouse, so air that’s induced while driving is distributed to the wheelhouse and inside bumper, reducing air stagnation.

Mountain-road-ready stopping power is delivered by 295 and 290 mm vented front and rear brakes, and corner-chewing grip coming from Michelin Primacy HP® tires on 17-inch wheels on the GR 86, and Michelin Pilot Sport 4® tires aboard forged black 18-inch wheels on the Premium grade.

The magic of the classic AE-86 was in its famously responsive handling and throttle.

For the new GR 86, the design of the Boxer-4 allows for balanced maneuverability. The horizontal cylinders contribute to overall vehicle weight control and allow for ultra-low placement in the engine bay, giving the car a well-grounded confidence at a curb weight of just over 1,270 kg.

The 2.4L engine’s bore and stroke dimensions have increased from 86 mm x 86 mm to 94 mm x 86 mm, and displacement is up from 1,998 cc to 2,387 cc. The engine retains the Toyota-innovated D-4S Dual Injection technology system, that combines direct fuel injection and port-injection technologies, while the port injection and in-cylinder injection have been optimized. The direct-injection system provides a cooling effect in the cylinders, which allows the engine to use a very high 12.5:1 compression ratio for maximum power. The port fuel injectors, meanwhile, come into play during light- and medium-load conditions to help maximize combustion efficiency.

Altogether it gives drivers an experience that only a naturally aspirated engine can deliver. One so scientifically refined that it brings drivers enough power to keep them engaged with a throttle that responds to their every whim.

The automatic and manual transmissions have also received the GR treatment.

The six-speed automatic transmission now employs adaptive controls that sense brake and accelerator operation, automatically shifting to the optimal gear so the driver can experience just the right amount of control. Torque capacity has also increased, as well as the number of clutch discs.

Add it all together and you get the agility, responsiveness, and easy-to-drive feeling that equals “86-ness.”

GR 86’s driver-focused cockpit is designed to elevate the daily driving experience while also offering a simplicity that keeps drivers squarely focused on the road. Start up the GR 86 and you’re greeted by a 7-inch Thin Film Transistor (TFT) screen with an opening animation sequence inspired by the piston movements of the GR 86’s horizontally opposed engine.

The display has an all-new three-mode digital instrumentation with Normal, Sport, and Track modes. While in Track mode, drivers get real-time readouts of gear position, engine speed, water temperature, and oil temperature.

Standard sport front bucket seats with side bolsters firmly hold drivers in place around each corner, with upgraded leather trimmed sport seating and aluminum pedals on the Premium model. The GR 86 also brings everyday usability, with 2+2 seating that offers the versatility of fold down rear seats.

GR 86 features Toyota’s Smart Key System (on both doors) with Push Button Start and adds an alarm to the anti-theft system. It lights the night with Standard LED headlights and available adaptive front lighting on the Premium grade.

All specifications are estimated and values and not final.

GR 86 pricing will be announced in the coming months and it will go on sale later this year.